All About The Milk

It's been 4 months (4 months?! Where did the time go?!) and alhamdulillah I've been able to exclusively breastfeed Aahil to date. 4 months, and not a single documentation on this amazing journey I've gone through?! Hehe. Gosh, honestly, it's been such a roller coaster ride for me this time around - I've gone from making just-nice milk, to making too much milk, to making too-thick of milk, to making thin milk, everything, you name it, I've gone thru it. I was in fact at the verge of giving up because I was getting frustrated of many things!

You see, I started pumping for stock as early as 2 weeks after delivery. Just like with Adeena, I did the same thing - fed Aahil on one side, and pumped the other. At this time, I was getting the normal yield - about 1-2oz on one side. At this time, building stock started off quite slow. I could only get one full bottle per day. This is my stash at exactly 1 month postpartum. 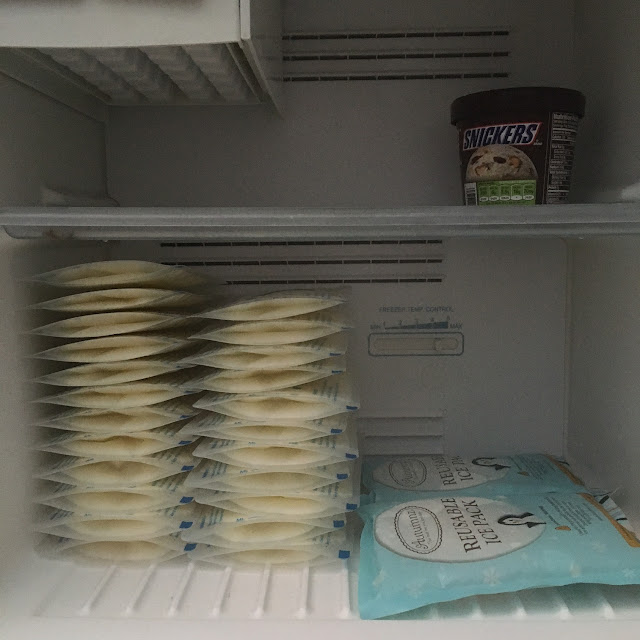 Nothing to shout about, but still rizq, alhamdulillah. After a while, slowly but surely, my supply started building up on its own. I was beginning to get 3oz on one side. And then, 4 oz on one side. And this is when things got a little hard for me. The good thing about making good amount of milk is that, alhamdulillah Aahil was able to sleep contently for long hours, especially at night. In fact, at 1 1/2 months, he was able to sleep for 3-4 hours stretch at night. It was fun at first, but soon became a problem to me, because when he can go hours without feed at night, my breasts became engorged. When this happens, I'd end up getting blocked duct which is not only painful but also stressful at the same time. (More on my experience in a separate post later). 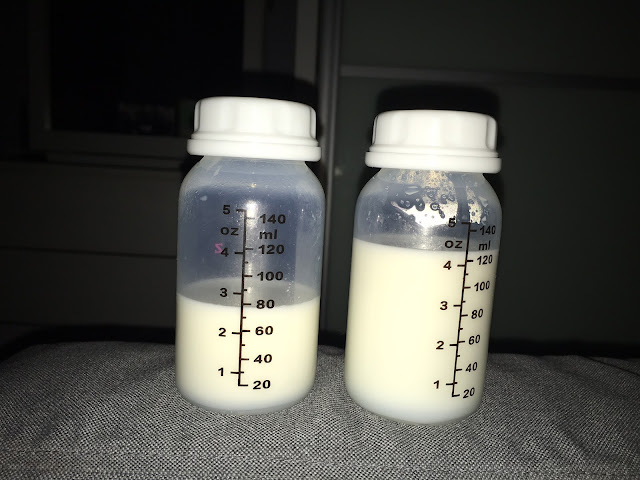 Yes, at this time, I was already a milk-making machine. If I go more than 2-3 hours without pumping/feeding Aahil, I would get engorged and almost sure to get a blocked duct. So every night, I'd have to make sure I pump/feed Aahil just before I sleep, and then wake up again at least once every night to pump, just to make sure I don't get clogged duct. I don't know if Aahil was not drinking much at night or if it was just my breasts making a lot of milk at that point of time, but even if Aahil has just fed, I'd still have to pump just to really empty the breasts and would still get about 3-4oz combined.

But the thing is, the more I emptied my breasts, the more milk my body would be making. And the higher chances for me to get clogged duct! It's such a vicious cycle! And the tough part is, I didn't want to do anything to decrease the supply either, because I knew it wouldn't be easy to increase the supply once it drops, so I had no choice but to empty my breasts as often as I could, even if it means waking up at 2-3am in the morning, staring at the blank white wall for a good 15 minutes, occasionally nodding off with the pump hanging on to my boobs. Yes, laziness is not an option, unless of course, I don't mind getting a another clogged duct lah.

So yes, for a while, I experienced how it was like being an oversupply mom and finally understood why it was not fun - at all. It also didn't help that at this time, my body was making such thick-ish milk, which also contributed to the clogged duct. Lo and behold - my breastmilk at 2 months+ postpartum, that could easily be mistaken for a yogurt! (Just for the record, I do not take any supplements, I just eat normally) 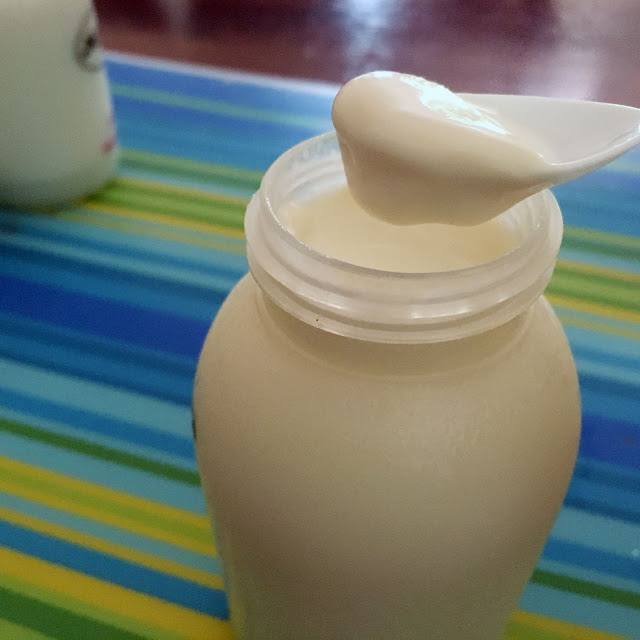 Yeap, I could literally scoop the yummy milk fat out - with a spoon! While it was definitely a good thing for the baby, it was also the culprit of me getting the recurrent clogged duct! I was getting frustrated and overwhelmed with the recurrent clogged duct due to the oversupply/thickish milk, I was secretly wishing that God would slow down my production a bit (justttt a bit, not a lot!) and made me a just-enough mom. I stopped drinking a lot of water, and was even afraid of eating/taking anything that would boost my milk suppy! LOL. No kidding!

I kept praying to God, please don't test me with another episode of clogged duct, please please please, because I do not think I could take it anymore. I was going to take the lecithin to thin out the milk as recommended by the moms in the BF support group when my husband said, this is the rizq Allah wants to give me. It's Aahil's rizq, don't thin out the milk because that's the natural nutrients in my milk for him. He suggested that I put the lecithin on hold, and if the clogged duct happens again another time, then I could consider taking it. Alhamdulillah, it's been a few weeks since the last episode, and it has not happened again!

It's been truly an emotional rollercoaster for me, and I'm telling you, this breastfeeding business is no joke! It's either you commit yourself 100% or not at all. Alhamdulillah, I chose to commit, and by the end of my confinement period, I was able to stock about 88 packets of ebm (12 bottles shy from my target, but it's okay), making it a total of 440oz worth of ebm prepared for Aahil before I returned to work. 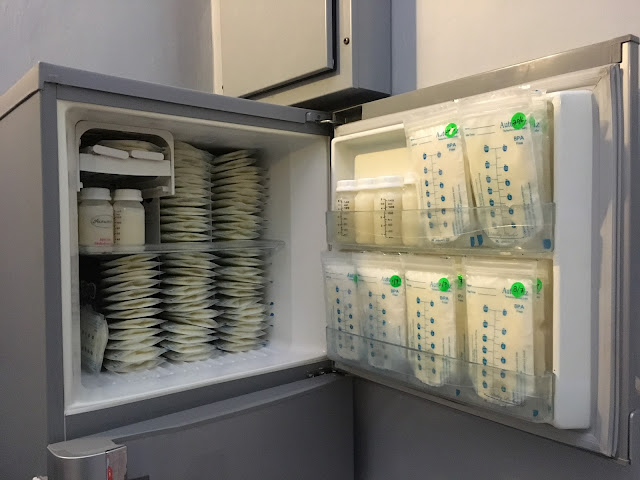 And now, it's been 2 months since I returned to work, and alhamdulillah, the stash has not only filled up the whole freezer compartment in the fridge upstairs, but also flourished to take up the first tray of the fridge's freezer downstairs, making it a total of about 120 packets together (about 600oz), for Aahil's consumption, alhamdulillah! 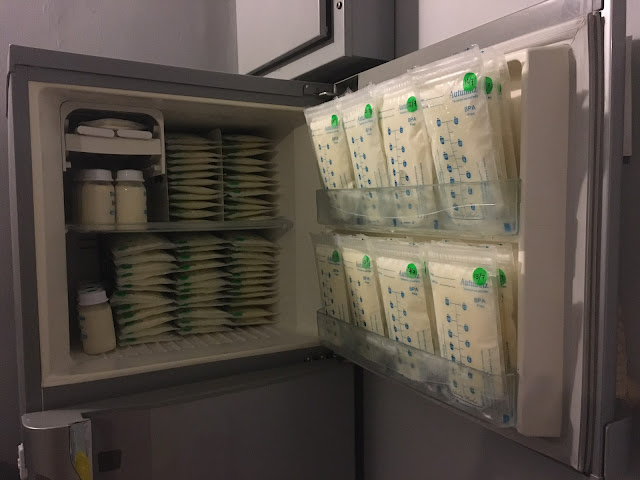 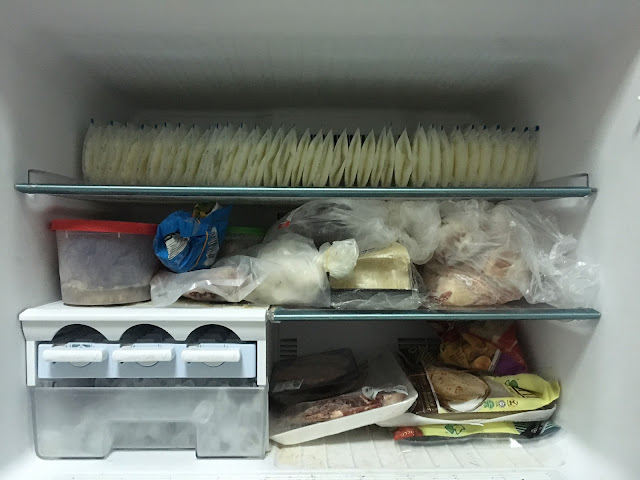 Please pray that I get to maintain the stock and fully breastfeed Aahil for 2 years, just as how I did with Adeena last time! Amin. :)
mind spoken outloud by Thara at 3:39 PM

Hi...just wondering...my daughter is going to be 2 years old next month and still bf but mix with formula too.I do not know how to make her stop as she going to be 2... My first son I went to umrah so when I came back he do not want to bf anymore..but this time I do no know what to do.

Maybe you can try the traditional way of weaning - apply some peria paste/coffee/asam jawa paste etc to your nipple to get her turned off by the taste?

When we are able to have this much of stock of ebm, the feeling is beyond words. i envy you, sis. i never had this much.

Alhamdulillah syukur, rezeki baby. :) It's okay dear, as long as you have enough for your baby, that's the most important thing! <3

Thara
A graduate of IT. Currently a Social Media Strategist in Exabytes Network. Can be very stubborn and choosy at times. Proud wife of Ahmad Azarinurazie @ Aien and a doting mother to darling Ahmad Aydein & Adeena Annur, mama's little precious. :)